Birds of Paradise, locally known as the Cendrawasih, are one of the iconic symbols of Papua. Many Papuans believe these birds are the reincarnation of fairies flitting around their jungles.

There are actually 38 species in the Bird of Paradise family, but one of the most sought out around Papua Paradise Eco Resort is the Red Bird of Paradise or Cendrawasih merah. This species is endemic to Indonesia and is found on the islands of Batanta, Waigeo and Gam.

Tours to search for these birds are offered through Papua Paradise, and are the perfect way to explore a little of the islands above the water.

What you’re looking for 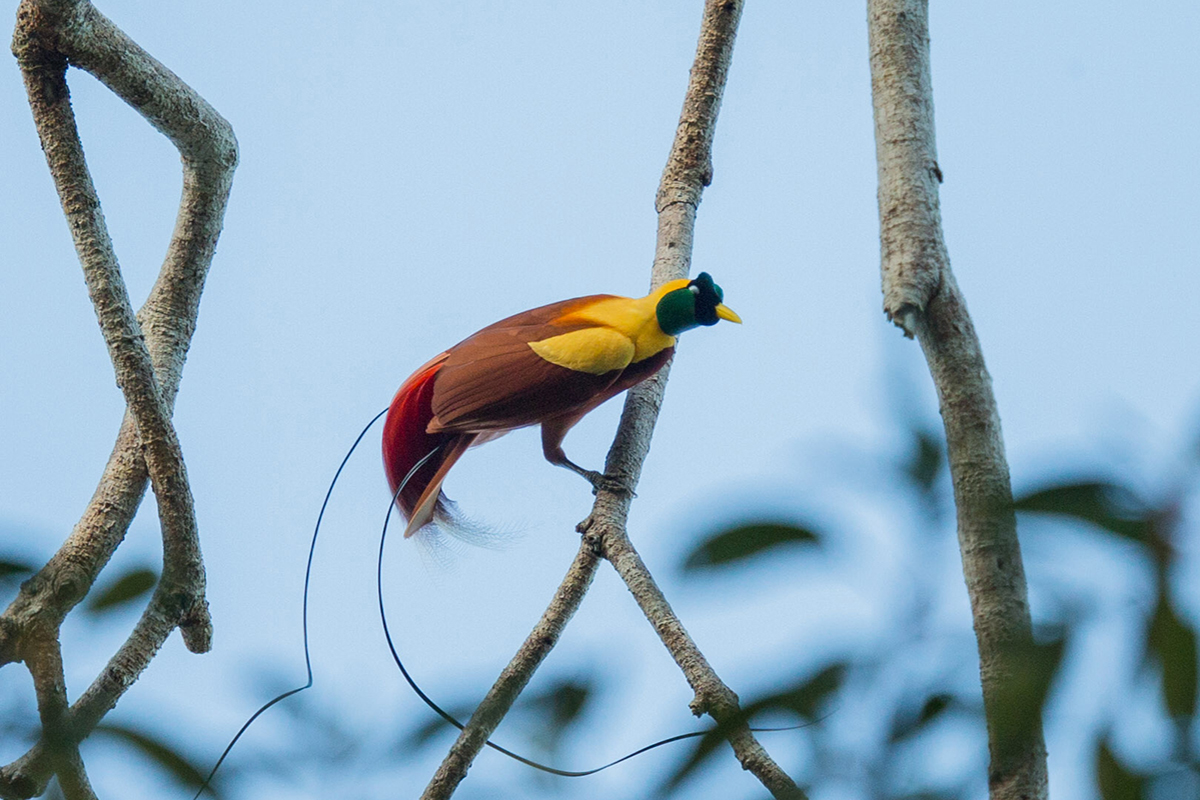 Red Birds of Paradise are large birds. The males can grow up to 30cm long, often with around 40cm more of spectacular ornamental plumage when they are fully grown. The males are the more impressive of this species, as with most Birds of Paradise. They have an emerald green face, dark green pompoms about each eye and glossy red plumes with black corkscrew shaped tail wires. The smaller females have a dark brown face and no red plumes. They are altogether less showy than their fancier mates.

Birds of Paradise eat insects and fruit but it’s the fruit in their diet that makes them such an important part of the ecosystem. They are very important in the dispersion of fruits seeds. The fact that they are agile and can reach the more difficult to access fruits makes them that much more crucial to the forests of Raja Ampat.

They also have the interesting adaptation that their stomachs are less destructive to seeds than other animals so seeds are healthier and more likely to sprout when they are dispersed in droppings. There are a number of fruit trees on the islands of Waigeo and Batanta that are thought to rely solely on seed dispersal by Birds of Paradise. 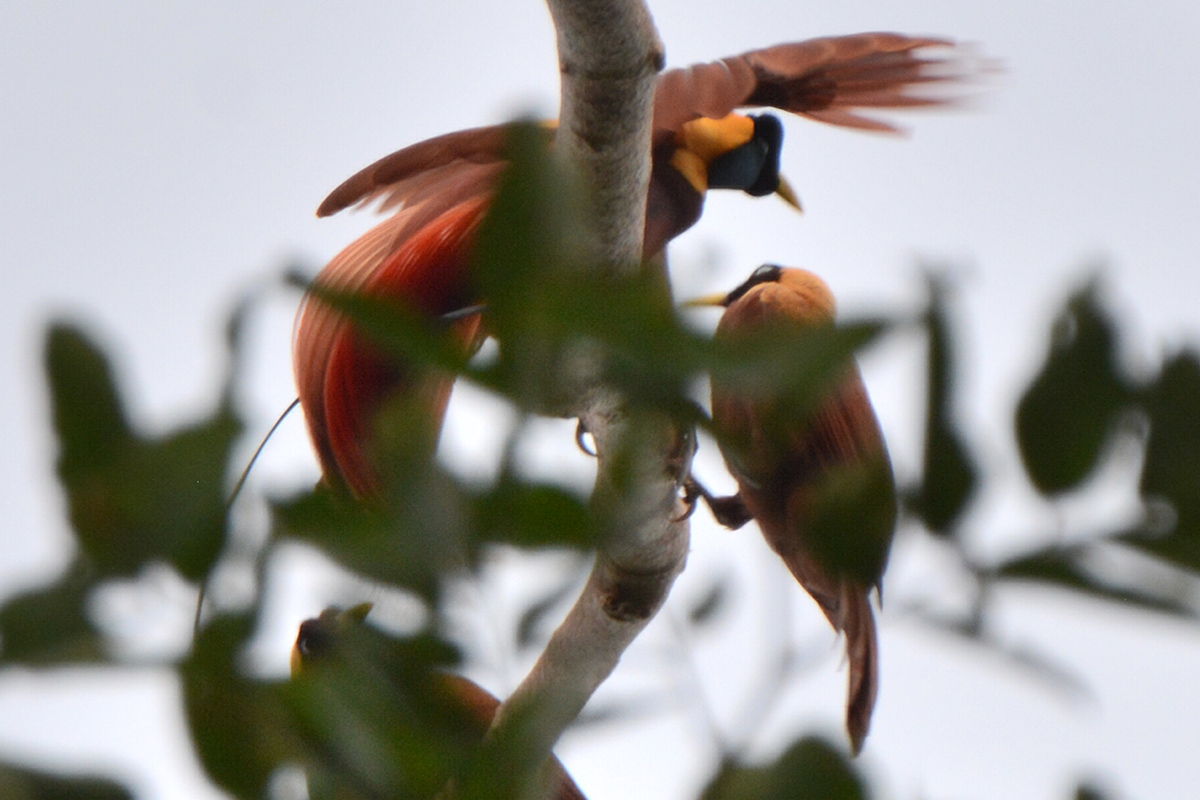 If you’re very lucky you might see the fantastic displays that male Red Birds of Paradise put on to court the females. Males get together in groups called leks and display together in static postures, fanning and dancing with their brightly coloured wings, plumes and tail tapes. Their breeding season isn’t well known but it’s thought that they display from at least July to September.

This species, like many others, is on the verge of being listed as threatened. The greatest threat to all Birds of Paradise is the destruction of their habitats. Logging, agriculture and development on the islands is destroying their homes and pushing them away from their natural food sources and the safety of their environment.

These birds have also been targeted in the past for their beautiful feathers. Thankfully, this trade is all but died out in the early 20th century and didn’t damage the populations too badly. Their plumes are still used in the traditional dress of many local tribes but again, in small enough amounts that the populations are not badly damaged. 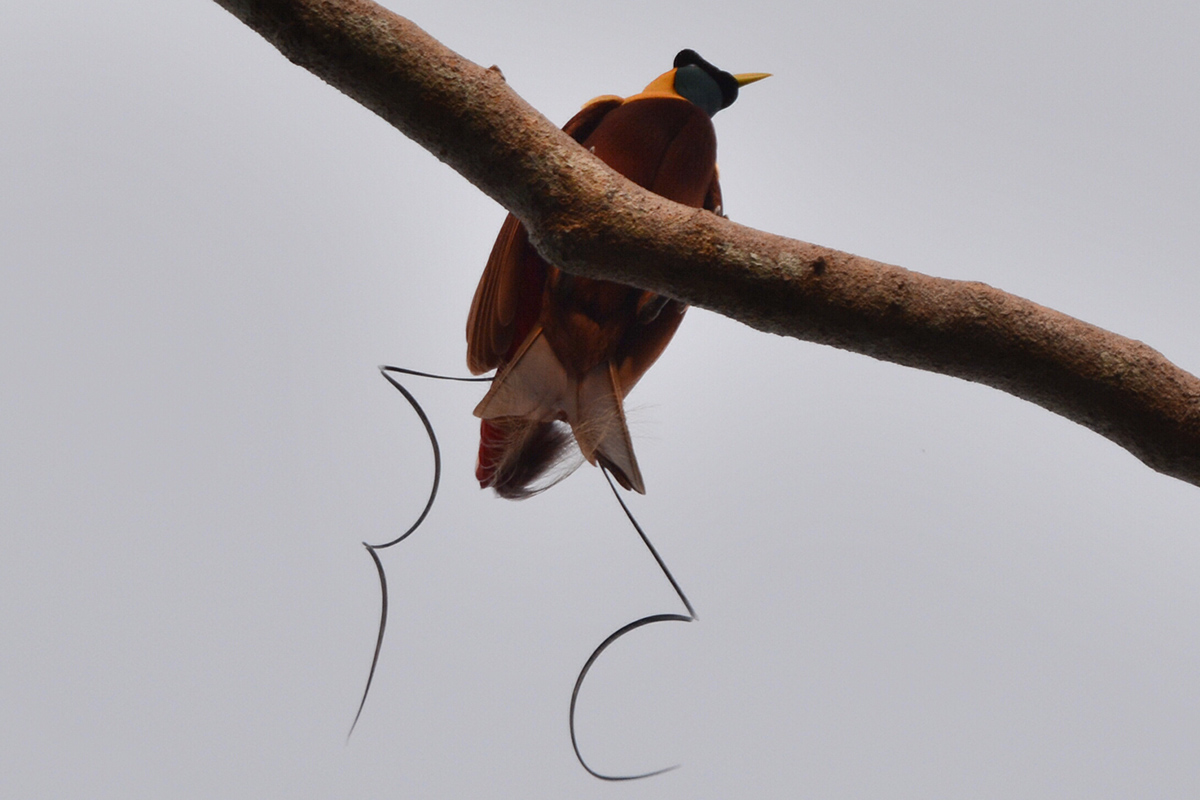 Are you interested in a tour to see these amazing birds? This tour leaves Papua Paradise at around 4.30am from Birie Island and takes about 30 minutes by boat and 45 minutes trekking through untouched rainforest with a knowledgeable guide. If you’d like to know more about the Red Bird of Paradise trip or other tours offered at Papua Paradise, leave us a question in the comments section below.