You might come to Raja Ampat looking for underwater life but you’ll find the nature on land pretty incredible as well. One of the strangest and frightening for those of us with arachnaphobia, is the coconut crab.

Locally known as ketam kenari, they are not only the largest species of crab in the world, but also the largest living arthropods. They can reach up to a massive 1 metre from leg to leg and often weigh around 4 kilograms. This is one huge crab species! 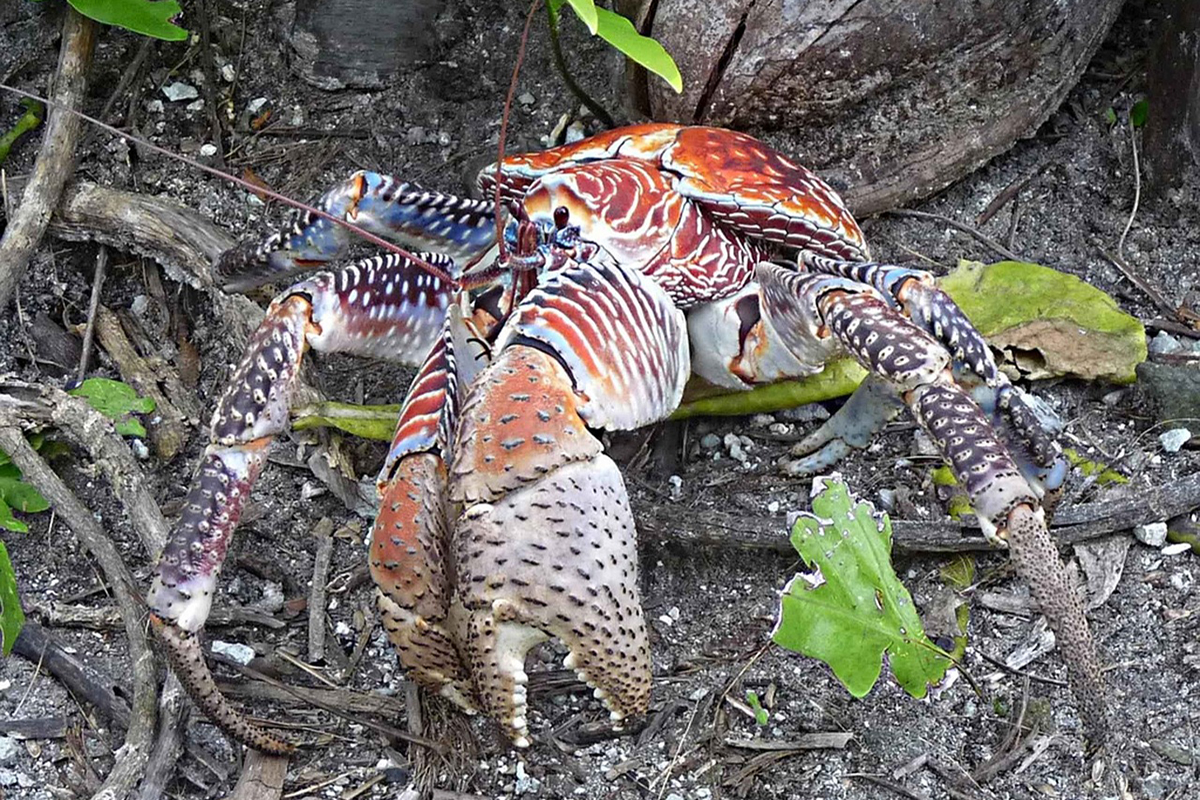 As a terrestrial crab, you might see these crabs walking through the jungle or on the beach. They are often photographed heading up coconut palms to find their favorite food.

What makes them even more special than just their sheer size is how intelligent they are. Once they’ve found a coconut they will take it down to the ground to strip the husk off. They then carry the coconut back up to the highest point of the tree and throw it to the ground cracking it open. It might take a bit of effort but they do love coconuts!

Unfortunately, people love to eat crab and coconut crabs are no exception. Their highly prized meat has led to them being hunted so extensively they are now an endangered species. Although they have been protected under Indonesian law since 1989 the law is only loosely upheld and they can still be found for sale. It is also unfortunate that the crabs are under the jurisdiction of the forestry service, which has no patrol boats.

This isn’t only happening in Raja Ampat. In the South Pacific and French Polynesia populations have dwindled so low that it is very rare to see them on islands with any human inhabitants. Many places in the world have banned or put strict limits on the number of coconut crabs that can be caught to save them from going extinct.

What You Can Do

Although you won’t be offered coconut crab at Papua Paradise Eco Resort, you may visit other islands where locals are trying to sell them. There is still a high rate of poverty in Raja Ampat and some people are willing to risk breaking conservation laws to make money.

There are reports of locals selling coconut crabs at the famous lookout spot at Piaynemo island. This is a major stop for tourists in Raja Ampat and can provide a good living for the sellers. However tempting it is to buy these crabs you should say no and report the sellers to your guide or the dive and boat staff.

To lessen the chances of tourists, who might not know coconut crabs are endangered, buying the animals there has also been a movement within the homestays in Raja Ampat. A circular reads, “No, we will not cook your coconut crab”. By refusing to cook coconut crab the sale and eating of this species can be lessened.

There have also been plans floating around to create a crab sanctuary where confiscated crabs are released. If it could be proven that tourists would pay to visit a ‘coconut crab island’ locals might be much less likely to catch and kill them.

If you are in Raja Ampat and see someone selling coconut crabs, do your part and report them. Together we can help raise awareness and protect this amazing species.

Have you ever seen a coconut crab? Do you find them beautiful or scary? We’d love to hear from you in the comments box below.