There are several versions told of the story of how Raja Ampat got its name. These stories have been passed down from one generation to the next. Here is one of the versions: 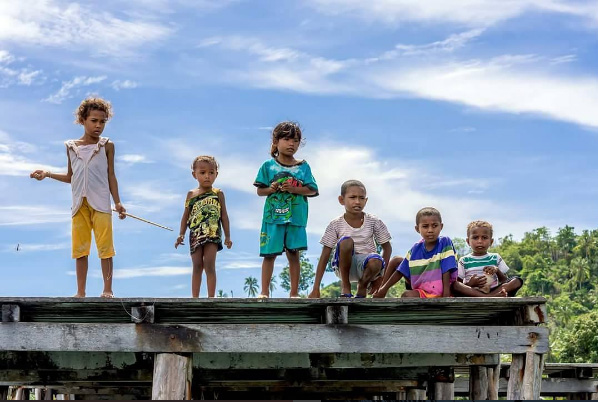 The Origins of Raja Ampat

Once upon a time, a husband and wife living in Teluk Kabui Kampung Wawiyai Kabui were going into the forest to look for food. They were forest encroachers. When they got to the bank of the River Waikeo, they saw 6 dragon eggs. They were hidden in a bag from which the man and woman retrieved them and took them home putting them away in storage. During the night, they heard whispers and after investigating where the whispers were coming from they were surprised to find that the eggs had hatched and brought forth 4 boys and a girl. One egg did not hatch. The clothes they wore indicated that they were descended from royalty. The children were named as follows:

The girl was named Pintolee and when she was found to be pregnant, her brothers placed her in a shell and sent her floating to Numfor Island. The egg that refused to hatch was named Kapatuai and turned into a stone. It was still treated as a King and was kept in a room that was special with guardians represented by 2 other stones. Year after year, Kapatuai is washed and that water is flushed and used in Baptism of Kawe. The stone is only seen when it is being washed.

The people of Raja Ampat are very respectful of the eggs and a house was put up by the Waikeo River as a home for them. It is now the object of worship for the people of that locality.

During the 15th Century, this archipelago was ruled by the Tidore Sultanate of the Maluku Islands. In order to rule effectively, this sultanate appointed four kings from the locale. They ruled the islands of Misool, Salawati, Batanta and Waigeo. These islands are the four largest in this area and the term used to refer to these 4 kings forms the root of the name given to the islands, Raja Ampat. There are 610 islands that make up Raja Ampat and it has 743 kilometers of coast lines. The Capital is Waisai, a city located in Waigeo Island.