Raja Ampat is located in West Papua, Indonesia. It is in the coral triangles center and is among the most biodiverse locations on the planet. Here, you will find over 1,400 fish species and 75% of all the coral species that are known to the world. This is what makes it known as the species factory.

Location and Size
The area that falls under the Raja Ampat Marine Protected area is about one million, one hundred and eighty-five thousand, nine hundred and forty hectares. They are actually 7 MPAs, which are managed by the regency of Raja Ampat, Ministry of Marine Affairs and Fisheries as well as the local communities and international NGOs. The overall area referred to as the “Crown Jewel” is 3.6 million hectares and is encompassed by the following locations: 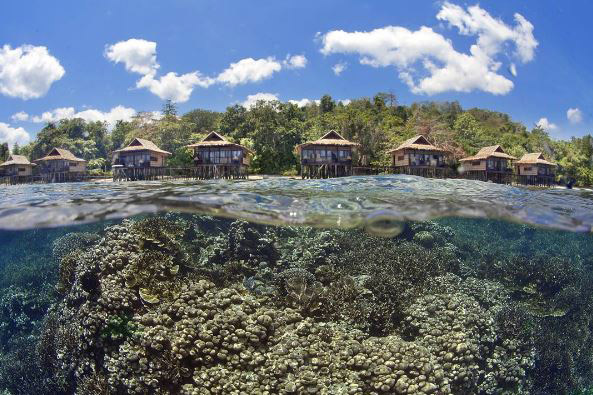 Cultural Values and Biodiversity
Raja Ampat straddles the Indian Ocean and the Pacific. The result is amazing biodiversity including atoll, patch, barrier and fringing reefs as well as deep channels. There are 1427 coral reef species and about 533 species of coral that builds the reefs. In an area of this size, it has the greatest coral reef diversity in the world. There are also 17 marine mammal species.

Most of the people who live on these islands reside in the rural areas and rely on ocean for their livelihood. Along with modern governance of the marine sources, old marine tenure and customary land systems continue to be in force. Managing marine resources is a delicate balance between traditional and modern practices, government and local communities.

Threats faced
The threats facing the marine life and coral reefs in this place include fishing practices that are destructive, run off from the farms, coastal development and tourist activities that are uncontrolled.  Additionally, climate change is a threat with impact that includes the rise of temperatures of sea water. The health of the ecosystem is also threatened.

The future
The future looks promising. Local organizations and international ones have formed a coalition and joined partners that include government, universities, local organizations and coastal communities that have been working together for over 10 years in order to tackle the said threats. Raja Ampat has declared that its waters are a sanctuary for rays and sharks. West Papua is also the very first “conservation province” in the world. This is a great example to the rest of the world.

Raja Ampat being the center of the coral triangle and home to so many underwater species, it is no wonder that this area is many scuba divers and underwater explorer’s bucket list. There are just so many things that you can explore here with the beautiful landscape scene, the people and the culture. You might be interested in one of our other blogs that we cover about the things you should know when visiting Raja Ampat.