If you’re planning to do any birding in Raja Ampat, the Sunset Hornbill Cruise from Papua Paradise Eco Resort is a must.

Hornbills are an impressive bird with some very special and unique characteristics. The guides on the tour will tell you lots of interesting facts about them but it’s always great to know a little before you go.

1. An Impressive Array of Species 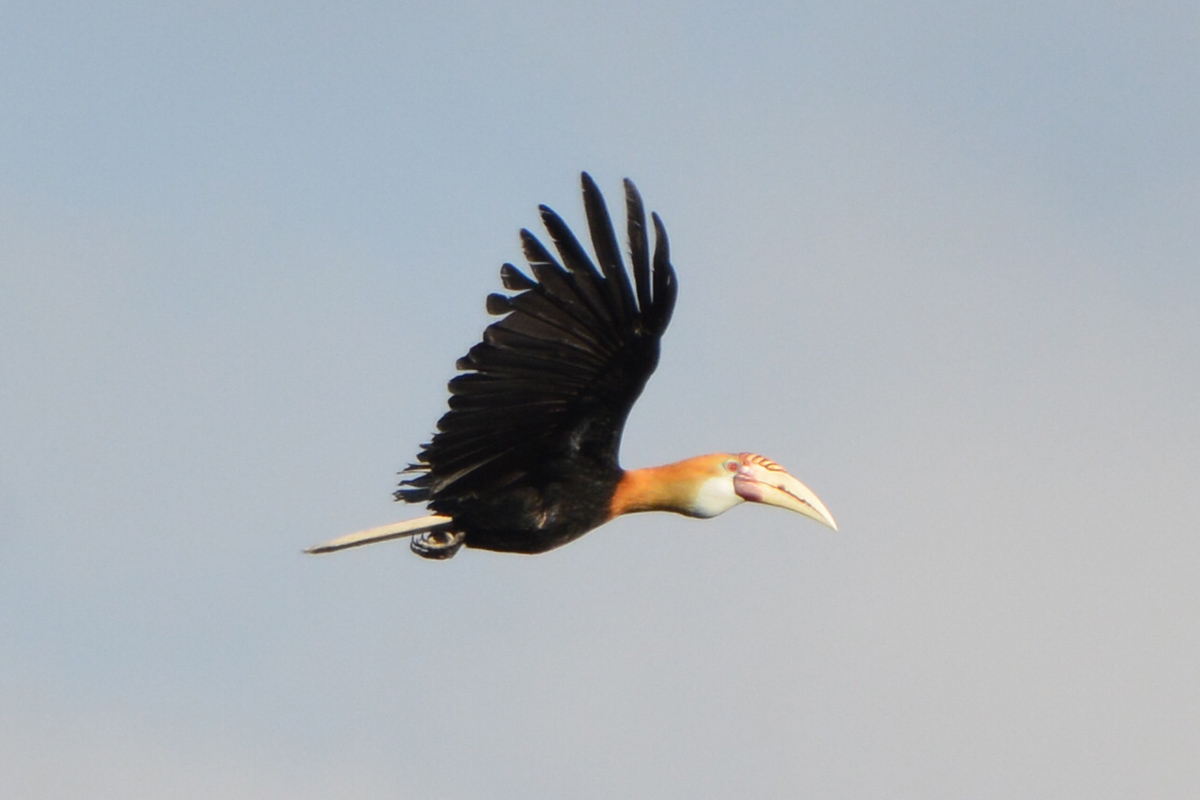 There are an incredible 57 species and 75 subspecies of hornbills spread throughout Asia and Africa. 32 of these are in Asia.

Batanta Island, just a short boat ride from Papua Paradise Eco Resort is famous for the Blyth’s Hornbills that roost in the mangroves there. These birds are also known as Papuan hornbills and are incredibly impressive birds.

Blyth’s hornbill is named after Edward Blyth who was an English zoologist in the mid to late 19th century. He spent much of his life in India and was the curator of the Museum of the Asiatic Society of Bengal. 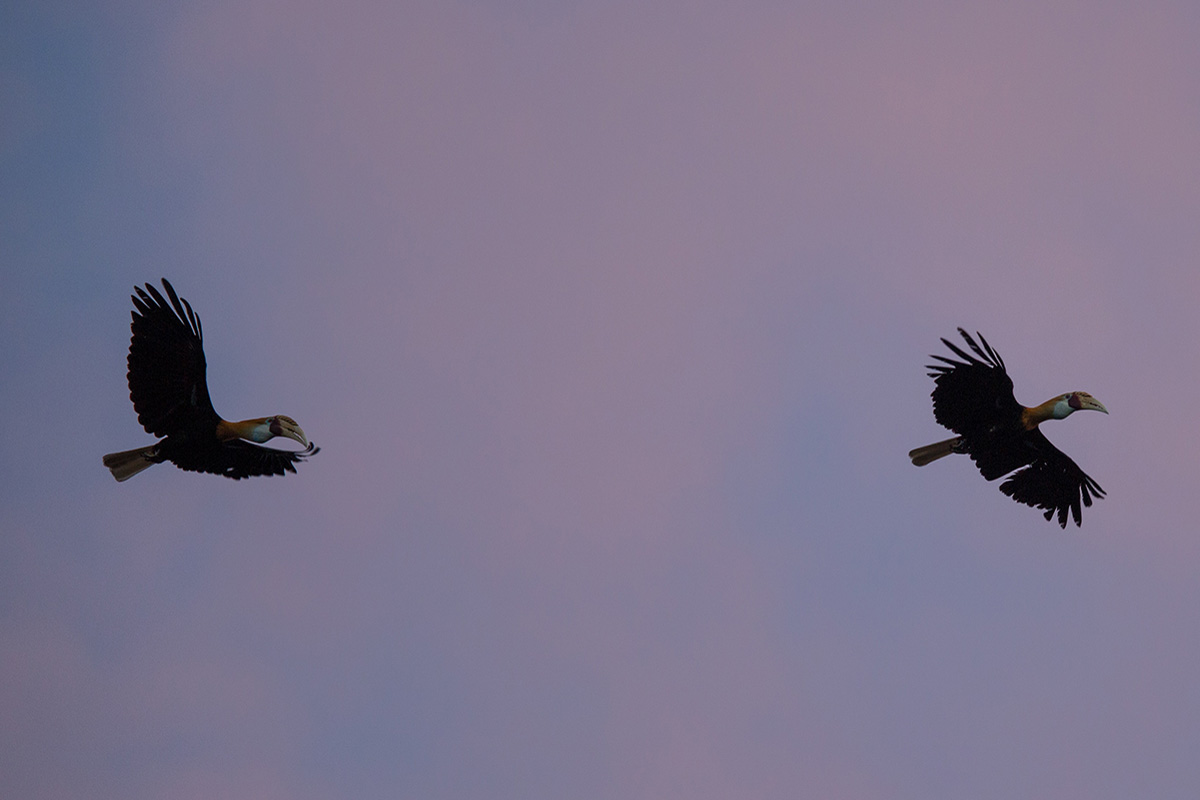 One of the most impressive things about Blyth’s hornbills, apart from their looks, is their incredible calls and sounds.

On a sunset cruise from Papua Paradise to Batanta Island to watch the hornbills arriving home, one of the first things you will hear is their wing sounds. This is a thrumming in the air somewhat like a steam train or even helicopter. With a wingspan of around 150cm this isn’t so surprising they make such an impressive noise.

The hornbills also make some impressive calls. Their gruff guttural calls sound almost like dog barks echoing through the trees. You might also hear a sound almost like laughing that they use to communicate. The sounds are often made through the casque which gives hornbills their name. It’s thought the amplification of sounds plays a roll in sexual selection.

Most hornbill species are monogamous. Once they have found their mate, they will stay with them for life. Together they defend their territory, build a nest and raise their offspring.

When you cruise to Batanta Island to watch the hornbills return to roost you may notice couples. The male is slightly larger than the female and has a light brown or light orange coloured head. The female is solid black except for white feathers at her throat and tail. 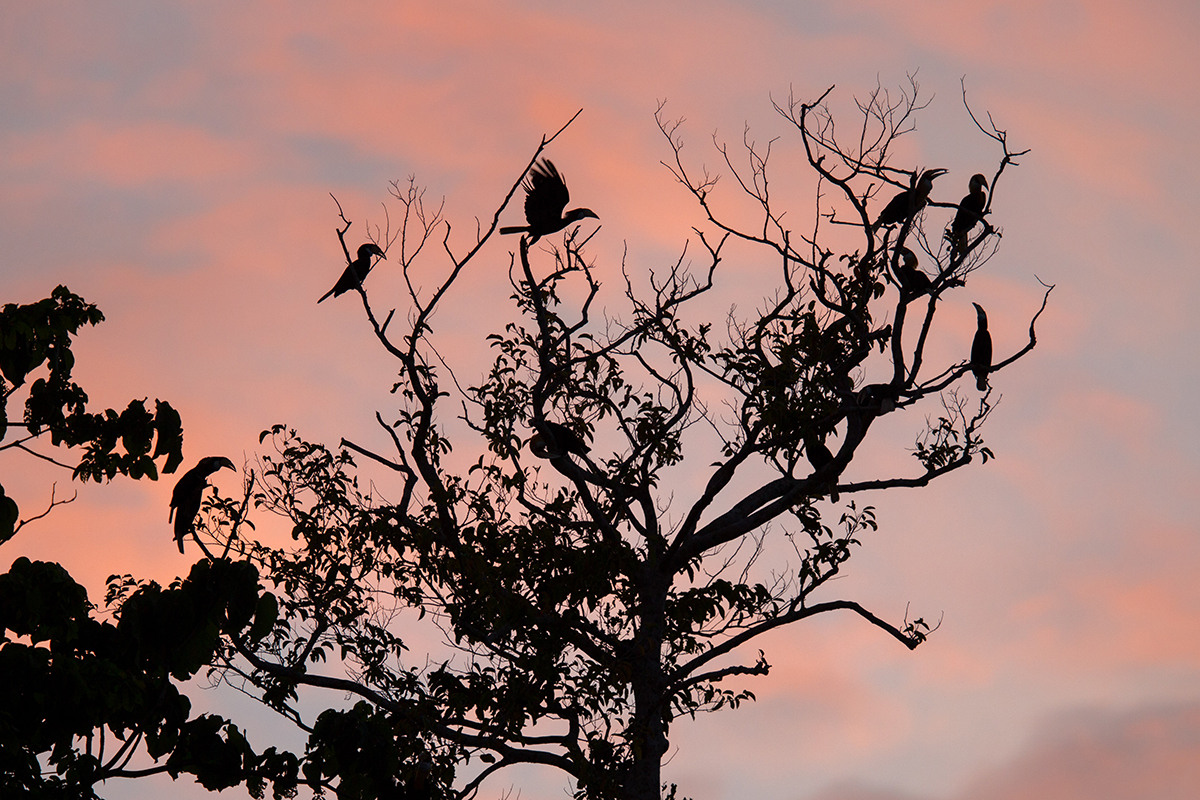 Hornbills have some pretty unique nesting behavior. Female hornbills will seal themselves in their nests while their eggs incubate and the chicks grow. They can be trapped in the nest for 3 to 5 months!!

During these months the females and chicks depend totally upon the male. They will have food delivered to them through a slit in the top of the nesting hole. Some species of hornbills even work together to feed the nesting females.

Another incredible behavior during this time is how the female disposes of waste. She will press her rear to the hole in the nest and shoot her excrement out. This keeps the nest clean and also confuses preadators. When the chicks are old enough, they will also learn this technique. In the meantime the mother picks up their excrement and throws it out of the slot.

Is your interest in these incredible birds piqued? If you’d like to know more about the sunset hornbill tour click here: Papua Paradise Tours. Or leave us a question in the comments box below.